This is a note for my presentation ofSchelling (1971) andClark (1991) for my supervisor’s seminar. Hope I don’t run out of time.
Title of this note comes from the interactive pagemade byVi Hart and Nicky Case.

The author spend 7 pages of 44 to explain why segregation is an interesting quetion to investigate, and also why it is difficult to do so.
In the author’s view, mainly three factors can explain segregation:

Admitting these limitations, the author started to construct his models.
There are three models: (actually two, but I just wanted to divide them)

The extension of neighbourhood is so arbitrary in real life, that we’ll have to define it in the model.

In this linear space there live two kinds of residents, the stars and the zeros, each have a 50% share of the whole line. They start with a pretty much random mixture.
Now let us define “neighbourhood” as the eight nearest residents, that is four on each side. Let us also set the preference for both groups. They want at least half of theirneighbourhood to look like them.
Figure 1 points out the residents that are not satisfied, given our definition of neighbourhood and preference. So they want to move. I will not talk about this moving mechanism too much, but an intuitive description is that they move to the nearest place that satisfies theirpreference at the minimumat the time they arrive.
Figure 2.1 shows the result after those who were originally dissatisfied moved away. We can easily see that these movings have created some newdissatisfied residents. Now let them move.

Figure 2.2 shows the result after everyone is satisfied. Though these three graphs, we can observe a clear tendency ofsegregation, even if all the residents want is only half of the neighbours being similar to them. The numbers in parentheses is the count.

Figure 3 shows another example with the same neighbourhood and preference settings.

Now we reduce the ratio of one kind of residents, say zeros, to make a minority.

Two observations can be made from the results shown in Fig. 6.

First, the segregation-ness of the majority tend to be higher, simply because there’s too few minority to live within a majority cluster.

Second,as the ratio of theminoritydecreases more,they tend to segregate themselves more from the majority. This is because at the initial situation, the minority faces far less choices to move to as the number of them decreases.

In linear living space, when somebody is moving in or out, we allowed automatic moving to make space and to close the empty space. However, this is so complicated in 2-dimensional living space, so we will just leave some blocks empty from the initial situation to let residents move in.

Moving rule is such that dissatisfied residents moves to the nearest empty block whose neighbourhood meets their preference. And the neighbourhood is defined as the 8 blocks surrounding any resident’s own block.

At this point, we also start to need a measure for segregation, because 2-dimensional patterns are not as easy to estimate as the linear ones. The measure that the author proposed is the average ratio of neighbourhood of the same kind vs of the opposite kind. Thus, the higher this measure is, the more extreme the segregation is.

Now we can look at this interactive page that I found on the Internet that generates such living spaces.

Parable of the PolygonsWe need to go directly to the simulator at the bottom, or directly go to thePolygons with Pentagons page.

Following are notes for the original paper:

Figure 7 shows an example for this model, and Figure 8 and Figure 10 are two possible results with different degrees of segregation.

Some variations of this model are discussed in this paper, but we will skip them for time contraint.

The idea ofcongregationist andintegrationistpreferences leads to the so-called “happy ending” in the Parable of Polygons. We can play it.
An “integrationist” preference means the resident doesn’t only have a minimum demand of neighbours of the same kind, but also has a maximumdemand of it, and will move if the density of same kind exceeds the maximum.
Three observations are made from this kind of preference:

Model 3 (bounded neighbourhood):
We now consider a different kind of neighbourhood. Suppose it’s not your realneighbours, but your schoolmates, your colleagues or your friends at the same club that you spend most of the day with.
Instead of defining “neighbourhood” by where you live, it’s now a certain area where you can choose to live in or not.
In this model, we also consider that each resident has an individual preference, which we call “tolerance”. For simplicity here is no maximum demand, but only minimum.
For the moving rules, we suppose that residents can both leave from and return to any area, and those who are more dissatisfied moves first.
One thing to notice is that everybody knows what ratio is inside the area now, but no one knows what happens in the future. This was also the assumption in the previous models, but not as important as shown here.

The two kinds of residents we are now considering are 100 blacks and 100 whites. Figure18.1 shows an explanatory distribution oftolerance among all the whites, where the horizontal axis represents the white population, and the vertical axis represents theirtolerance as a ratio of blacks to whites. The highesttolerance is two, means that the single mosttolerant white is satisfied to live in an area where blacks outnumber whites two to one.
We assume Blacks are the minority, so there are only 50 Blacks, and they have an identical distribution oftolerance.
Figure 18.1 and 18.2 are originally fromClark (1991), Figure 1.
By multiplying x-axis and y-axis, we can find how manyopposite kind of residents are withintolerance byboth kinds. And we flip the graphs for Blacks, to put bothparabolas together. This is called the tolerance schedule by the author.

In Figure(X) (made by me using Grapher), the x-axis represents the number of Whites, and the y-axis represents the number of Blacks.The shaded area S is the overlap between the two graphs, which shows the possible static combinitions of Blacks and Whites.
We can view this graph as a map of a city, at each point live a certain number of Blacks and Whites, corresponding to the coordinates of that point.
For each point, residents live around it consider whether they want to move there or not, and residents live in the point consider whether they want to move away.

If someone’s moving in and no one’s moving out, the point is pushed to upper-right; if movements in both directions happen by the same amount, the point is in dynamic balance.
Let’s think about the movement of all residents. Three observations are made here:

Arrows in Figure18.3 (originally Fig 2 fromClark, 1991) are the movement vectors for all areas. From these, we can draw the striking conclusion that there exist only two stable equilibria, (100,0) and (0,50). Which will occur depends on the initial mixture and relative speed of moving of the two kinds.

(Another way to phrase:
These kinds of movement lead us to the points where both kinds of residents can finally settle down.
The obvious answer would be, there are three points where dynamic balance can be achieved. The all-White, all-Black and the mixed.
The problem is, we also want the points to be stable. Say, if a group of the same kind come all of a sudden, after some movements, are we able to return to the original point?
For the mixed balanced point, unfortunately, the answer is no. If a group of Whites come to the point, it’s pushed to the lower right because less and less Blacks would want to live there, vise versa.

Thus, the conclusion is, under this setting of number of residents and tolerance schedule, only extreme segregation can survive as the stable equilibrium.

The outcome, of course, depends on the distribution of tolerance and the number of both kinds of residents.
Consider another situation, where Blacks and Whites are equal in number, and the most tolerant of them can be satisfied living with 5 times of residents of the opposite kind.
so they still need to be multiplied with the population 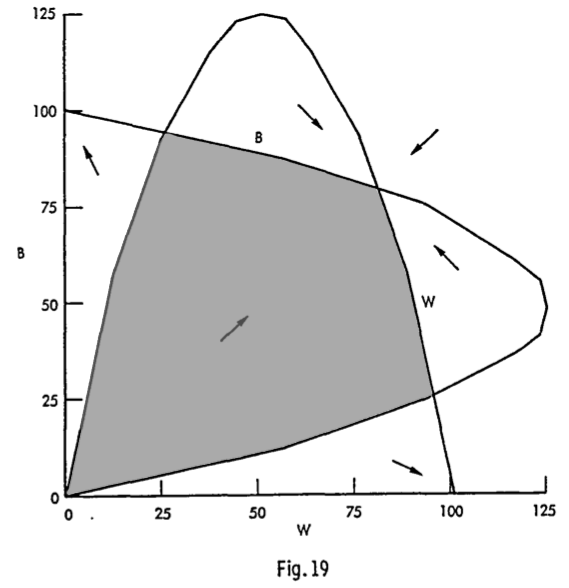 For time constraint, we skip the following variations:

Through thevariations, we can make some interesting observations:

Empirics:
In the late 80s, Clark did his telephone survey with this question in five cities in the US, to find out the tolerance distribution of the residents.

Now suppose you have been looking for a house or apartment and have found a nice place you can afford.It could be located in neighborhoods with different racial groups.What mixture of people would you prefer? Would you prefer a neighborhood that is …

The subjects in the other four cities are Blacks and Whites, and are Blacks, Hispanics and Whites in Los Angeles.

I’ll omit LA because it has three graphs in every step by its own. They are pretty much the same.

The results are very similar.
The minority tend to have higher tolerance, while the majority don’t really want to live with them.

But remember these are the tolerance distribution, so they still need to be multiplied with the population.

These are the resulting tolerance schedules.
You may have noticed how similar they are compared with the graph from the model.

Let’s take a closer look at two of them.

I coloured a bit to let you see it more clearly.
The red area is the tolerance schedule of Whites, and the blue area is that of Blacks.
They look exactly like in the model that we have seen. Again, the stable equilibria are achieved with extreme segregation.

Also, notice that the overlapping areas are actually quite small, given this is already the enlarged graph.
As the author conclude, without substantial intervention, we should expect that mixed equilibria can hardly occur “naturally”.

With the difference of interest, income and wealth, the segregation in real life can come even more severe, which we can still observe today.

That’s all I have to say. Thank you.